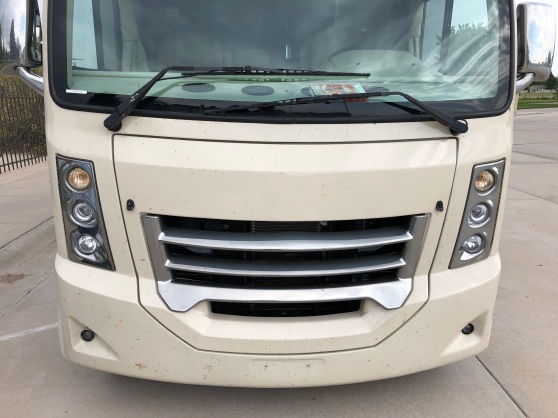 The KOA at Wakeeny is literally 5’ from the roaring truck traffic of I-70, but for $2 they will make you two pancakes for breakfast that weight 5 lbs. a piece. As we walked over to the little A frame building, I was thinking that the pancakes were an attempt to make up for the location, but if it was, they need to work out something else, because these suckers aren’t any bigger than the usual pancake, they’re just incredibly dense and putty like.

After putting more air in Thor’s tires to counteract the weight of the pancakes that would be in our stomachs for the next few days, we drove out on I-70 again, determined to get to the end of the never ending road that we had heard so much about. And as predicted, we got hit with a couple of hours of driving rain, non stop truck traffic and a vicious cross winds that threw in a 25 mph gust every few seconds. For a good three hours I worked the wheel like a nascar driver. And then at the Colorado state line; the wind just stopped.

I guess I expected instant mountains and trees, but there wasn’t really much difference between Kansas and Colorado. Well, I guess they tried. In an effort to hide the hundreds of square miles of corn, they planted a single row of 10’ tall pine trees. But just for about the first 1/4 mile.

We were ahead of time so we decided to stop at the “Colorado Welcome Center”. We picked up some brochures and then when I got back to the truck I receached up for the door handle and I felt a twinge of pain in my shoulder joint. I slowly moved it through a range of motion. And then tried to put my arms up like I was grabbing a steering wheel. “Ow!!! Great! I have… ‘motor home shoulder’”!

We also left the Colorado Welcome center with two flys. Two flies that we swatted and cursed at all the way to the next camp ground. It was like the State of Colorado took a page out of KOAs customer service policy. “Welcome to Colorado. We’ll be wrenching your shoulder out of its socket as a toll, but here’s some flies to make up for it!”

Driving the rest of the way on the two lane road with a lame shoulder wasn’t as bad as I thought it was going to be. But it was still a dangerous road. The terrain seems pretty flat, but you’re right at 6,000 feet elevation for most of the time which turned a simple rain storm into a hail storm that left piles of ice/snow on the road for miles. It was like being on another planet!

The last couple of hours, we kept looking in the distance for the rocky mountains to appear… but because of the odd “moon like” rolling terrain, and the rainy skies, we didn’t get a good view of them until we were all the way to Colorado Springs.

Oh, I almost forgot… we saw hundreds of enormous, ultra futuristic looking wind turbines along the way. I guess some people don’t like them, but I think they’re amazing! I felt like I was in a Star Wars movie. They’re remarkable pieces of engineering; they’re beautiful and what a great place to put them! It would be absolutely dumb not to have them. It would be like the Sunshine State not taking full advantage of the ridiculous amount of sunshine we get. Yeah, sorry. It seems as though the sun is bright in Florida, but that’s about all.

Tonight we camp in an RV Park at the foot of Pikes Peak that was hit hard by a flash flood two weeks ago and by a storm with softball sized hail that also wiped out pretty much every rental car in town. Tomorrow, if the weather holds out, were doing some heavy duty touristing!

And buying a damned flyswatter.