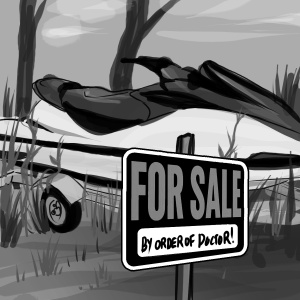 I know that waverunners make you angry, buzzing noisily around your boat while you’re trying to fish or flying back and forth past your favorite relaxing sunbathing spot, but I will make you a bet… no matter how much you hate them, as soon as you get on one, open up the throttle and go skipping across the waves you will automatically smile.  It’s a complex phenomenon called… fun.  I know, I know!  They are evil, stinky, dangerous, devil machines that many people think should be outlawed… but I’m just saying, they are fun and will make the meanest old poop grin like an eight year old.  And there in lies the problem.  They also have a tendency to make you act like an eight year old.  Case in point.

I admit it… several years ago we owned a waverunner.  It was great.  Lori and I would cruise around, Lori with her arms around me as I drove around, stopping at secluded beaches, having lunch at dockside restaurants.  It was all great fun.  Of course the more we rode around the better we got at maneuvering it.  It was an amazing machine!  Even with Lori seated behind me I got to where I could be going 30 mph and then by just cranking the handle bar to the side, immediately spin around and be going the opposite direction…without wiping out.  And I never lost Lori once!

Anyway, that went on for a couple of months and then one day Lori tells me, “You know, that seems like fun… I want to do it.”  Lori is a great driver so I wasn’t worried.  As soon as we changed places, Lori punched the throttle and took off.  We were shooting out into the Gulf going at least 50mph, Lori hunkered down over the handlebars and me hanging on around her waist… both of us with maniacal grins on our faces.  Suddenly, Lori leaned back and yelled, “So, do I just turn the handle bars to make it spin around?”  I put my mouth up to her ear and yelled “Yeah, but…” And that’s the last thing I remember… until I noticed that it had become absolutely quiet and I was on my back looking up in the air.  But, I wasn’t touching the water and the wind was blowing really hard… AARGGGHH!  I realized that I was flying through the air at 50 mph… and then I hit the water!  After flipping and spinning through every yoga pose in the book I finally came to a halt and bobbed there in the water.  I looked around behind me and there was Lori, laughing hysterically and about 300 feet behind her was the stupid waverunner; still upright and idling quietly.  Slowly turning in a circle like an animal in a cage.  I swam over to Lori, made sure she still had all her parts and then said, “As I was saying… Yeah, but you have to slow down first!”

Although we thought we were o.k., the next morning we both woke up with extreme whiplash and what our family doctor diagnosed later that day as a case of strained everything.  In the doctors office after the examination he calmly wrote a prescription out.  “This should take of it,” he said as he ripped it off the pad and handed it to me.  Usually you can’t read their writing but this one was written very clearly and carefully. It said… “SELL YOUR WAVERUNNER!”  It was the cheapest prescription I’ve ever filled.