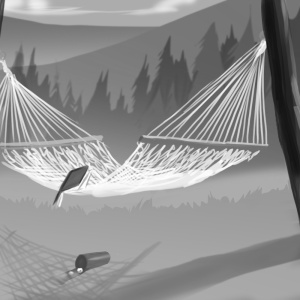 I spent the weekend attempting to do something that is rare for me to engage in… nothing.  Lori and I traveled to Georgia, hung our hammocks side by side on the porch, poured ourselves a cool drink and kicked back with books that we weren’t all that interested in reading.  It looked like it was going to be a beautiful, quiet day in the mountains and then… our neighbors woke up.

Old Billy down the creek had apparently acquired four more hound dogs… making it an even eight.  Ironically, we call Old Billy the Dog Whisperer.  I say ironically because he loves to train hunting dogs, but it involves very little whispering and a great deal of screaming and barking.  Today, he was apparently training a dog to imitate a seal.  “ARF, ARF, ARF!”  Ten minutes later, the hound was still at it.  I lowered my book and looked at Lori over the top of my glasses.  She looked back at me with her eyes crossed.  Right!  I got up and walked over to the end of the porch and was preparing to scream a neighborly “SHADDUPP!!!” when on the other side of the ridge I heard someone crank up a chain saw.  It revved up to a high-pitched scream and then stayed that way.  Well, at least I couldn’t hear the dog barking anymore.  I went back to my hammock and tried desperately to meditate the noise away.  But after ten minutes of brain scrambling noise I sat up.  “Oh for Pete’s sake… How big of a tree is he cutting down?”  Lori didn’t reply.  “Hey!” I hollered to her through cupped hands.  Nothing, she just kept reading.   I leaned towards her and then I noticed the headphones.  She was in her own little world listening to her IPod.  How dare she not be as upset as I was about the lack of peace and quiet!  But before the “sitcom” husband in me had the opportunity to try to make sure she was as irritated as I was, I heard my closest neighbor crank up a leaf blower.  This lady has been known to chase a single leaf down her 1,000 foot drive way.

“ENOUGH!” I roared, shooting out of my hammock like it was a catapult!  Lori looked up.  “Did you say something?”  “Oh… very funny” I said and then I pointed up the mountain.  “These people have no right to disrupt the one day that I have to enjoy the blissful quiet of these lousy mountains!  I slipped on my boots and went trudging off through the gate and up the hill.  “What?” hollered Lori.  “ARRRGH!” was all I could get out.

As I approached the obsessive-compulsive leaf chaser, I noticed that she had a big smile on her face, which was irritating, but it stopped me in my tracks.   She was methodically moving back and forth cleaning her driveway with a genuine look of contentment on her face.  She was oblivious to me, and everything around her.  I knew that look.  It was the look of contentment you get from doing a simple task that you really enjoy.  Sweeping, gardening, painting… (Well, not painting, at least not for me.)  I didn’t have it in me to take that from her, so I turned my attention towards the inconsiderate neighbor with the screaming chain saw.

As I pushed through the brush straight up the hill, I could see him at the bottom of the gully.  He was surrounded by logs that were carved into bears!  The one he was working on was a particularly large carving of a mother and her cub that was magically appearing from a large oak log.  I could see his face through the visor.  He was concentrating but relaxed as he circled the log, cutting away everything that wasn’t a bear.  I knew that look as well.  Hmmph… Probably someone I’d like to talk to someday, I thought… but not today, he looked busy and… happy.

As I made my way back, everything had quieted down except for the barking dog.  There was no possible excuse for that.  But when I reached Billy’s house I could see exactly what was going on.  The entire family was in the front yard watching a tiny Boston Terrier play a game of tag with an extremely large bloodhound.  The small dog was popping in and out of different places under the old house.  It was absolutely hilarious.  And the laughter of the family was surpassed only by the look of joy that the Boston Terrier wore.

It was clear that everyone around me was blissfully involved in their own personal pursuit of happiness.  But how was I supposed to tolerate my neighbors’ pursuits when they were in such obvious conflict with my own?

Since that day, the noise of life doesn’t bother me quite as much, not only because I realize that I’m responsible for generating a great deal of my own, but because I believe that the pursuit of happiness is likely the primary goal and right in all our lives, deserving of as much respect and tolerance as we can give to one another.  Oh… also because I bought some great headphones.