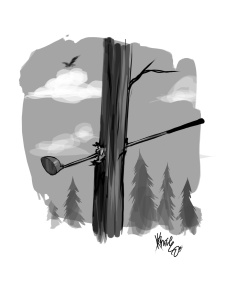 Golf.  Some people love it and it consumes every facet of their lives.   Me?  I am a “hacker”.  I’m simply not very good at it and although I used to play more frequently, I now play about, oh… once a decade.  For me, being on the golf course early in the morning, the dew sparkling on the beautifully kept grass surrounded by a park like atmosphere, is breath taking.  So, to the irritation of whomever I’m paired with, I am perpetually distracted by the sprawling vistas and the wildlife, content to sit in the cart with my feet propped up, arms behind my head, eyes closed… enjoying the summer breeze and a cool beverage.  I basically turn into “The Dude” from the “The Big Lebowski” on the golf course.

Not that I can’t hit the ball well; I can.  As long as it’s with a three iron or higher and you don’t define “hitting it well” as going in a specific direction.  My reaction to a bad shot or a good shot (as long as no one’s property or ability to reproduce has been damaged) is always the same; it’s all fun.  Because of this, when I am paired with someone who, in my opinion, takes the game way too seriously, things can get very interesting.

On one outing about ten years ago, I jumped into a golf cart with a gentleman whose soft, calm voice and casual demeanor hid someone who loved to play golf, but apparently hated golf clubs… and grass.  As he approached the ball he calmly chatted about the condo he just invested in or something… I don’t know, I was watching a deer cross the fairway… anyway, when he swung, his ball apparently ducked, because the only thing that flew forward was a divot the size of a briefcase.  This of course made my “cool beverage” come out of my nose.  Then, evidently not being satisfied with the amount of damage he had done to the fairway, he immediately began to violently pound the ground with his club, over and over.  As he silently walked red-faced back to the cart, bent club in hand, I decided that it might be a good idea to get some general information about this fellow.  So I jumped out of the cart, walked over, picked up the giant chunk of sod and threw it back in place with a thump.  As I stomped it down flat, without looking up I said “So Oscar, you don’t carry a handgun do you?”  No reply.

Riding with him on the way to the next hole, I watched him suspiciously out of the corner of my eye.  He was talking calmly about real estate again, smiling.  I got out and grabbed a seven iron, still carefully watching “Attila the Golfer” with a raised eyebrow.  I swung without thinking much about it and as a result, the ball landed perfectly on the green.  My partner didn’t seem to notice and pulled a fairway wood from his bag, still chatting about prime real estate, the Chinese economy and who knows what else.  Then he swung, topping the ball and sending it back about 40 feet behind us.  I slouched down low in my seat, my seven iron clutched tightly in front of my face. Oscar actually started growling!  His eyes bugged out as he glared at his club held high over his head!  With all his might he swung again, screaming like an Olympic athlete, throwing his club a good 50 yards into the woods.  He spun around and glared at me, daring me to comment.  I shrugged and faked a grin. “Nice follow through?”

I don’t know what my final score was, (because I tend to just “doodle” on the cards) but the other guy was wrong about real estate and right about the Chinese economy.  I believe that’s Par for the course.